This week’s post comes from Alex Anderson. Alex is a second generation Scottish-Canadian currently pursuing a Bachelor of Arts with a major in History at Simon Fraser University. Growing up with a Scottish father and grandparents, he has always been interested in Scottish culture from a young age. Alex is deeply interested in how Scottish culture has impacted the development of British Columbia, and is looking forward to exploring their rich history in his remaining years at Simon Fraser University.

The rain soaked forests and valleys of British Columbia have been a popular destination for settlers since the demand for valuable furs drove traders west in significant numbers to the Pacific Ocean in the mid-nineteenth century. In 1857 the Fraser Canyon Gold Rush ushered in thousands of Americans hoping to make their fortunes, and the need to control the masses of foreign prospectors urged the creation of the colony of British Columbia in 1858 (the colony of Vancouver Island was created in 1849). The Scottish, a statistical minority in both Great Britain and Canada, dominated the economy and political scene in British Columbia to an unprecedented degree. Thousands settled across British Columbia following the Province’s creation, and the city of New Westminster, stands as a testament to the many thousands who made the journey west both across Canada and by ship. Founded with the purpose of creating a new capital for British Columbia, New Westminster was home to a large contingent of Scottish settlers and was only surpassed by Vancouver in population in the beginning of the twentieth century. 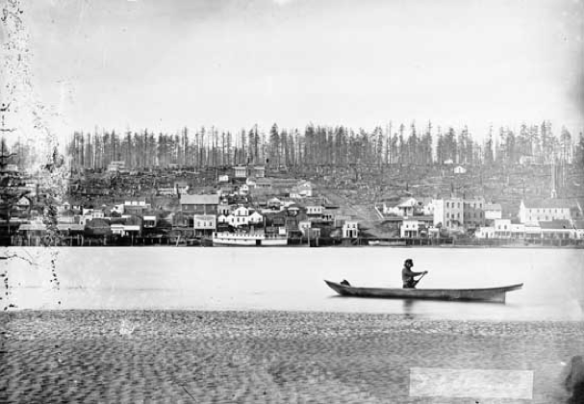 One Scottish family in particular has cast a long shadow over New Westminster since the 1890s. Born in West Kilbride, Ayrshire in 1832, Hugh Galbraith moved with his parents to New Brunswick during his early childhood.[1] Canada was a popular destination for Scots in this period. Its inexpensive land, growing industry, and the chance for a new start were too good to pass up for many back in Scotland. It is unknown at exactly what age his parents made the trip across the Atlantic, however it’s clear that he spent his formative years in New Brunswick learning to become a carpenter. He married Jane Lindsay in Beldune who gave birth to Margaret, James Lindsay, John Holmes, David Stuart, William Sutherland, Robert Chalmers, Charles, and Hubert over a 19 year period.[2] Aged 42, in 1884 Hugh took his wife and 8 children across the Northern Pacific Railroad to Portland, Oregon. This route would have been typical for the time, as the Canadian Pacific Railroad had yet to be completed. He then sailed to New Westminster and moved in to their new home, a small house on what is now called Eighth street.

Galbraith began his career in New Westminster working as a factory hand with three of his sons at the Royal City Planing Mills. Skilled and ambitious, and after a period of 7 years Galbraith could afford to open his own carpentry business in 1891 which he named Galbraith and Sons. His company produced a variety of finished woods including cedar, spruce, and hemlock, as well as being suppliers of sash and door material.[1] Galbraith and Sons met with glowing reviews from clients, and his work was considered to be very high quality. Galbraith profited hugely and managed to open his own mill along with a factory on 10th street, firmly making himself the latest in a long line of successful Scottish industrialists.[2]

Despite his modest working class background, Hugh Galbraith was able to become a preeminent force in the economy of New Westminster at the time, a tale of success which mirrors many other notable Scots in British Columbia, such as Governor James Douglas. Galbraith and Sons was by no means running on Hugh’s efforts alone, however. According to a news report, a directory listing from 1909 shows that Hugh, John, William, Charles, and James were all involved in the running of the business, with different family members active across the various sites which they collectively owned. [3] Close family ties proved to be an invaluable tool for the Galbraith family, a common occurrence among Scottish families involved in business. Members of the family were also active in the local lacrosse community.[4]

A fire would be the end of Galbraith and Sons, burning down their factory in 1932.[1] This was followed by a loss of another one of their factories in Queensborough, effectively ending the company.[2] Though the company has long since been defunct, an enduring testament to the Galbraith family’s legacy is found in the famous Galbraith Manor, situated at 131 Eighth Street in New Westminster. Galbraith Manor was built in 1892 shortly after the opening of the family business.[3] It was intended as a showpiece house that would display their company’s quality design techniques and wood finishing. It has been renovated since this time; however, the original furnishing and style is maintained by the city of New Westminster. Its impressive architecture is unique to its time, and it currently stands as a notable example of New Westminster’s many beautiful old homes.

The legacy left by pioneering early Scottish immigrants such as Hugh Galbraith can still be felt alive and well across British Columbia. Many Scottish social and cultural groups are still active, and Scots and their descendants continue to play a large role in politics. One thing is for certain, that the Scottish story in British Columbia has only just begun.

1 thought on “Lowland Tycoon: Hugh Galbraith’s Story of Success in the West”