This week’s blog comes to us from Ray Eagle, FSA. Scot. Ray was the author of many articles on the topic of the Highlands and the military. He was also the author of  In the Service of the Crown – the Story of Budge and Nancy Bell-Irving (Golden Dog Press, 1998). This blog is in honour of the Seaforth Highlanders Highland Homecoming, a celebration of the regiment’s return to the Seaforth Armory on September 24, 2016. Ray Eagle sadly passed away in August, 2017.

Henry Ogle Bell-Irving (1856-1931) and his siblings came from a wealthy, but later impoverished, family whose estate, Milkbank, was near Lockerbie in the Scottish Borders. A financial catastrophe bankrupted their father when a fire destroyed the warehouse on his West Indian plantation and with it his fortune.  In spite of his father’s financial catastrophe putting his family at risk, H.O. (as he became known) was able to establish himself in one of British Columbia’s early major industries, leading to him earning the title ‘Dean of the West Coast Salmon Industry.’

Soon after the fire, H.O’s father died and his young widow Williamina, mother of seven children, faced reduced finances. She took the family to Germany where the cost of living was cheaper, and H.O. eventually enrolled at Karlsruhe University where he received a degree in civil engineering.

H.O. arrived in Canada in 1882. Like many young men, in order to make his fortune he joined the Canadian Pacific Railway as a surveyor, progressing westward as it was built.  He was an accomplished water-colour artist and his paintings of the Canadian wilderness are housed in the British Columbia Provincial Archives in Victoria. They were painted under the most primitive conditions, but have survived well.

H.O. left the railway and reached Vancouver in October 1885 where, with his drive and energy, he saw enormous possibilities; at first working as an architect ,and later as a land developer in the growing province. In 1886 H.O. returned to Britain to marry Marie Isabel del Carmen Beattie (Bella), daughter of a wealthy Torquay, Devonshire family. She was not at first taken with a city she considered to be primitive, and it is to her credit that she stayed and became a tower of strength to her husband, despite increasing ill-health. H.O. began looking for more business opportunities and the following year he chartered the 879 ton sailing ship Titania to bring a mixed cargo from London to Vancouver.

In these years, the principal industries in British Columbia were fishing and forestry. Salmon runs were on every river from Oregon to Alaska and H.O. organized a return shipment of sockeye to Britain. He was certain that he could excite business people there to B.C.’s investment opportunities. On April 14, 1891 he issued a prospectus and by the end of the year he had raised £200,000 capital and formed the Anglo-British Columbia Packing Company (A.B.C.), acquiring options on nine canneries; seven on the Fraser River, and two on the Skeena River. Ever the astute businessman, H.O. established the head office of the A.B.C. in London while he formed H. Bell-Irving and Co. Ltd. to become the selling agent on the west coast. Instead of taking a salary from the A.B.C., H.O. drew large commissions from international fish sales. The A.B.C., eventually became one of the largest salmon packing enterprises on the west coast, shipping salmon to Britain, France, China, India, Australia, and New Zealand.

H.O. and Bella Bell-Irving about the time of their marriage (courtesy of the author)

In 1887 H.O. and Bella began to raise a family. In spite of a list of ailments, which included arthritis, Parkinson’s Disease, and neuritis, she gave birth to ten children, four girls, and six boys. The first born boy was christened Henry, the third in as many generations and a family tradition for the first-born boy.

H.O. took a great interest in community affairs in the rapidly growing city of Vancouver. He became an Alderman, chairing the Board of Works, and was also President of the Vancouver Board of Trade. In November 1910, together with other expatriate Scots, H.O. helped to found the 72nd Seaforth Highlanders of Canada.

It was inevitable that a man with such energy would upset a few of his fellow citizens and this occurred with the Seaforth’s foundation. One of the founders, Pipe-Major Hector MacKenzie, was interviewed by Major J. Matthews, Vancouver’s first city archivist. Mackenzie told him: “At a meeting to discuss outfitting the regiment, Henry Bell-Irving – you know how important he thought himself – took it upon himself, much to the disgust of many, to steal the whole show and just rode right over  everybody. He was very domineering!”

Since then, the Bell-Irvings have played a vital role in the regiment. When WWI began in 1914 all six boys joined the armed forces. Henry, the eldest into the navy; Richard, Malcolm and Duncan earned their wings in the fledgling Royal Flying Corps, while Roderick and Aeneas went into the army. Roderick, the only one who remained in a Highland regiment throughout the war, was killed in action in the last few weeks of hostilities. Malcolm and Duncan were both wounded in flying combat and later in flying accidents. Between them, Henry, Roderick, Malcolm, and Duncan won nine bravery decorations. 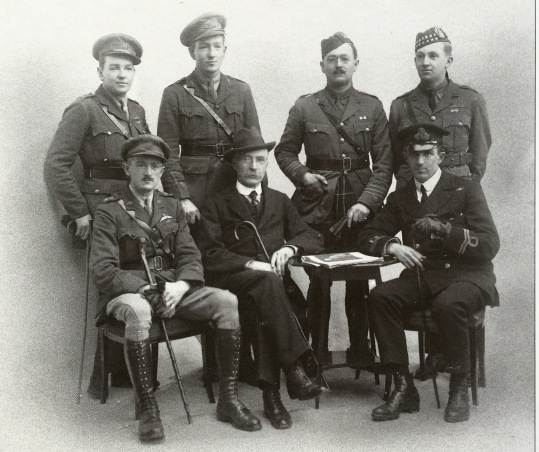 H.O with his sons in WWI. L-R at the back: Malcolm, Aeneas, Roderick, Duncan. L-R at the front: Dick, H.O., Henry (courtesy of the author)

H.O. continued to mastermind his fishing company and it weathered many critical times, but it paid handsome dividends during most years. Despite increasing age H.O. was reluctant to give up the reins to his sons, preferring to make all decisions himself, which did not sit well with the more ambitious ones. It was a shock to many  when, at age 75, H.O. became ill with cancer and died in February 1931. He remained active
almost to the end and was skating in Switzerland just weeks before he died.

H.O.’s grandson Brigadier the Hon. H.P. (Budge) Bell-Irving and his father Henry outside Buckingham Palace in WWII when Budge received a bar to his Distinguished Service Order (courtesy the author)

In WWII three of H.O.’s sons, Henry, Duncan, and Aeneas rejoined the armed forces, one in each of the three services. The most celebrated of the next generation was Brigadier the Hon. Henry Pybus (Budge) Bell-Irving. Budge commanded the Seaforth Highlanders of Canada in Italy and Northern Europe, winning a D.S.O. (Distinguished Service Order) and bar before taking over a Brigade in the final months of the European Campaign. After the war, Budge established a real-estate company, followed in his grandfather’s footsteps as President of the Vancouver Board of Trade, and, from 1978 to 1983, served as B.C.’s 23rd Lieutenant-Governor. Budge’s son, Roderick, also commanded the Seaforth Highlanders of Canada, the third Bell-Irving to command the regiment.

The Seaforth Highlanders of Canada Museum and Archives

The author would also like to thank the Bell-Irving family for providing access to all relevant papers and images.