In honour of this being the month of Robbie Burns celebrations around the globe, we are pleased to introduce our second place winner in the 78th Fraser Highlanders prize for Scottish-Canadian history, Georgia Twiss! The competition was open to students of Dr. Katie McCullough’s BC history class in the Fall of 2017 at Simon Fraser University. Georgia is also the recent winner of the George Paris Award for Scottish History. This marks the first in a series of blogs written by students who chose to participate in the competition.

At press time, Georgia Twiss was an Honours student in the Department of History at Simon Fraser University. Her research focuses on the impact of the British Empire on the urban development of Glasgow, and the legacy of imperialism within Glaswegian heritage. As a descendant of Scottish immigrants to Canada she has attended Burns Suppers in both Canada and Scotland, and looks forward to attending a “Gung Haggis Fat Choy” celebration in the future.

Why celebrate Burns Supper’s in British Columbia? As a cultural icon, Burns embodies Scottish-ness. Therefore, the celebration of his life took on a dual meaning. It honoured the life and work of Burns, while also acting as a nostalgic link to home. In celebrating Burns, the Scots across the British Empire gathered in their new communities and commemorated their heritage through song, dance, food and poetry. The former British Prime Minister James Ramsay Macdonald summed up the important of Burns to the Scots in his assertion that, ‘In Burns there was that magic that made every Scotsman alive; that made him thrill with the consciousness of his nationality; and made him strong and powerful to do his duty in the world.’[4] 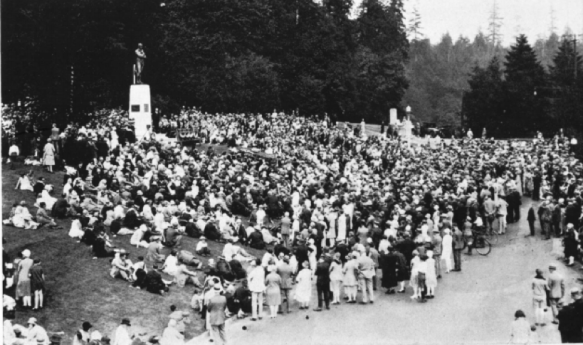 “Crowds at the unveiling of the Burns Statue in Stanley Park, 1928.” Reid, A. Fraser. [Untitled]. Photograph. Vancouver, BC. 1928. From Vancouver’s Tribute to Burns. Accessed November 2, 2017. http://www.electricscotland.com/burns/vancouver_burns.pdf

Vancouver, unlike Nanaimo, did not have an official Burns Club until 1924. The establishment of the club arose from members of the city’s St Andrew’s and Caledonian Society, founded in 1886, who desired a space where “Burnsians” could celebrate and debate the work of ‘the immortal bard of Caledonia.’[5] The first meeting of the “Burns Fellowship” took place on February 20th 1924, led by Mr P. McAuslin Carrick.[6] This first meeting had an attendance of seventeen people, but by 1928 the club membership had risen to 175.[7] The popularity of the club resulted in the successful bid for an erection of a statue of Burns in Stanley Park. The five-thousand-dollar statue was unveiled on August 25th 1928, with Vancouver councilman Henry E. Almond proudly proclaiming, ‘I am satisfied this day will go down in Canadian history.’[8] The event was followed by the celebration of a Burns Supper. 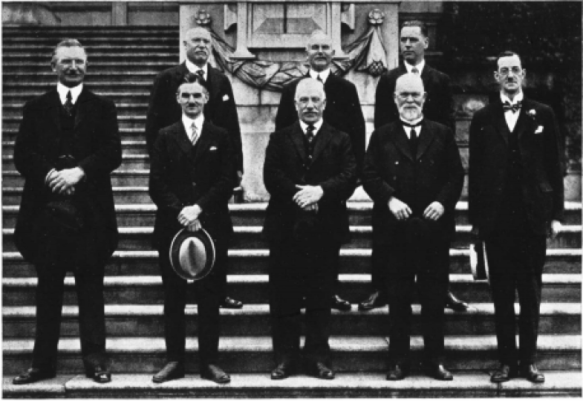 Seventy-years after the unveiling of the statue of Burns in Stanley Park, Todd Wong held his own Burns Supper. Like the original meeting of the Burns Club, Wong’s dinner was attended by a small group of friends. Yet, unlike the traditional Scottish version of the event, Wong used his Burns Supper to honour the multi-culturalism of British Columbia. In representation of the two dominant immigrant cultures in British Columbia, he called the event “Gung Haggis Fat Choy Robbie Burns Chinese New Year Dinner.”

As an undergraduate student at Simon Fraser University in 1993, Wong was first introduced to the idea of the Burn’s supper. Wong recalls of his first Burns Supper, ‘I thought it was this weird ethnic tradition. They gave me a kilt to wear, the Fraser hunting tartan. And I was carrying the claymore. We walked around the cafeteria. There was a lonely piper. And the haggis tasted really weird.’[9] The experience stuck in Wong’s head in 1998 upon the realization that Robbie Burns Day and Chinese New Year happened to fall only two days apart he decided to combine the two events.

From the small supper held in his kitchen for a group of friends, Wong’s event has become the largest attended Burns Supper in Vancouver.[10] Around five-hundred people gather each year and take-part in the festivities. These include amongst other things, rap performances of Burns’ poetry and haggis won-ton. When asked if the movement away from the customary Burns Supper’s format caused any backlash amongst traditionalists Wong responded, ‘On the contrary. People say it’s more Canadian when you’re mixing things up.’[11] 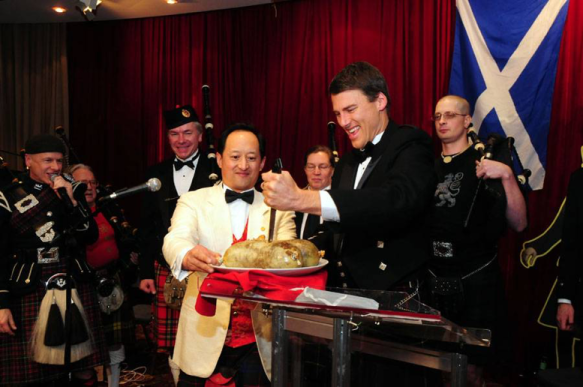 The celebration of “Gung Haggis Fat Choy” illustrates British Columbia’s multicultural experience in action. The ability of two cultures, who have a problematic historical relationship, to fuse together into a shared celebration is remarkable. Importantly, the event does not wash away the realities of the Chinese Head Tax or the mistreatment of Chinese workers in the construction of the Railroad. Rather, it presents a meeting point where resemblances between the two cultures are exposed. The shared love of New Year (Hogmanay to the Scots) and the importance of song and poetry within cultural celebrations are examples of similarities. In 2011, the event extended its celebration of multi-culturalism in British Columbia to include Indigenous traditions alongside those of the Chinese and Scottish. This special dinner was called “Gung Haggis Fat Choy Pow Wow Dinner.”[12]

From the “Bobby Burns Suppers” of the 1890s to “Gung Haggis Fat Choy Pow Wow Dinner,” the evolution of Burns suppers in Vancouver illustrates the growing acceptance of cultural diversity in the province. In a time where the current political climate is ripe with xenophobia and anti-immigration rhetoric events like this become increasingly significant. If Robbie Burns embodies what it means to be Scottish, then “Gung Haggis Fat Choy” embodies what it means to be a British Columbian. 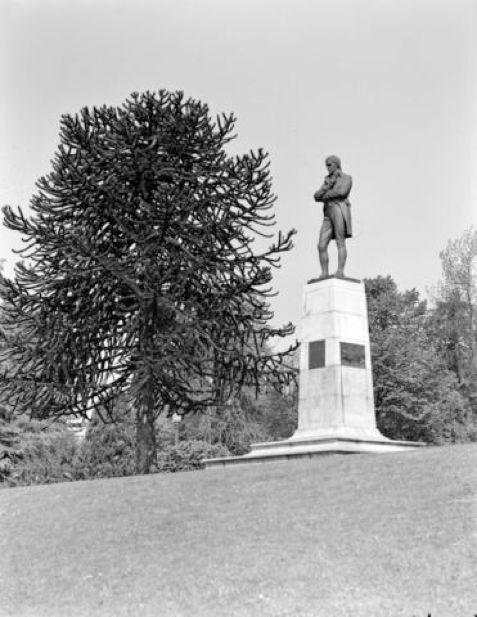 When the Burns Club set out to erect a statue of Burns they ensured that its placement would allow the poet to look onto the city.[13] Once a year, from where he stands, Burns’ statue witnesses people of all different ethnic backgrounds come together and link hands to symbolize the unity of culture in British Columbia and the shared experience of ‘Auld Lang Syne.’

1 thought on ““Gung Haggis Fat Choy”: The Evolution of Burns Suppers in Vancouver”